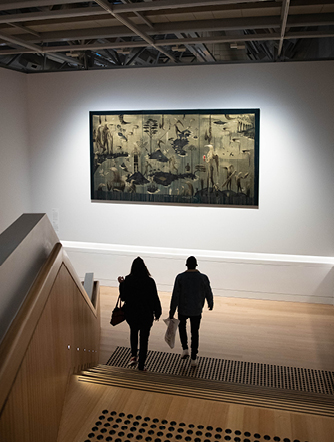 We were deeply saddened to hear of the death of Bill Hammond. Hammond made a huge contribution to New Zealand art over the past 40 years. Best known for his magical, haunting bird paintings, his work has engaged deeply with Aotearoa’s environmental and colonial history.

Bill Hammond grew up in Christchurch and learned to draw from his father, with whom he had nightly sketching sessions. After finishing school he enrolled at the University of Canterbury, where he studied fine art while also playing drums in a popular folk band. Hammond finished university in 1968, going on to work in a sign factory, and designing and making wooden toys. He became a full-time painter in the 1980s, producing an electric group of works that meld together references to music, art history, cartoons, Japanese manga, and computer games. With vivid, acid colour, and exaggerated figures occupying strangely distorted spaces, these works create surreal worlds out of the city, the house, and the landscape.

There was a huge shift to Hammond’s painting in 1989, after a trip made with a group of other artists to the Auckland Islands. Around 450 kilometres south of Aotearoa, these are wild and remote places. Hammond was deeply struck by being in an environment with no human habitation. He saw the islands as a kind of primeval landscape, one still owned by birds, like New Zealand before the arrival of people.

Returning to Christchurch, Hammond began to introduce these birds into his work. Elegant, elongated, and watchful, his bird creatures often have human bodies, with bird heads and wings. They are sometimes clothed, sometimes engaged in familiar, domestic activities. There is often a disturbing darkness to these scenes – laced with the threat of violence.

Bill Hammond’s first series of bird paintings were centred on the figure of Sir Walter Buller (1838–1906), an ornithologist who recorded and collected large quantities of endangered birds in 19th-century New Zealand. Hammond referred to Buller as ‘the bird stuffer’, and his works reflect a deep anxiety about the impact of colonisation on New Zealand’s ecology.

In later paintings such as Traffic Cop Bay, Hammond’s birds are still watchers over the land. Part-animal, part-human, these creatures preside over a watery landscape of islands and hills. The long drips of paint, running down the canvas, are typical of Hammond’s work. Here they seem to pull the birds into the environment, their bodies further entwined by traceries of leaves which pattern their torsos.

Bill Hammond’s paintings are rich, mysterious, transporting worlds. Deeply engaged with the impact that humans have had on the natural environment, they are also thick with references to art, colonial history, music and popular culture. Hammond is a towering figure in the history of contemporary New Zealand art. Here we offer our thanks for his work, and our deepest sympathies with his family and friends.

Traffic Cop Bay is currently on display in Toi Art, on the wall of the staircase between Levels 4 and 5.