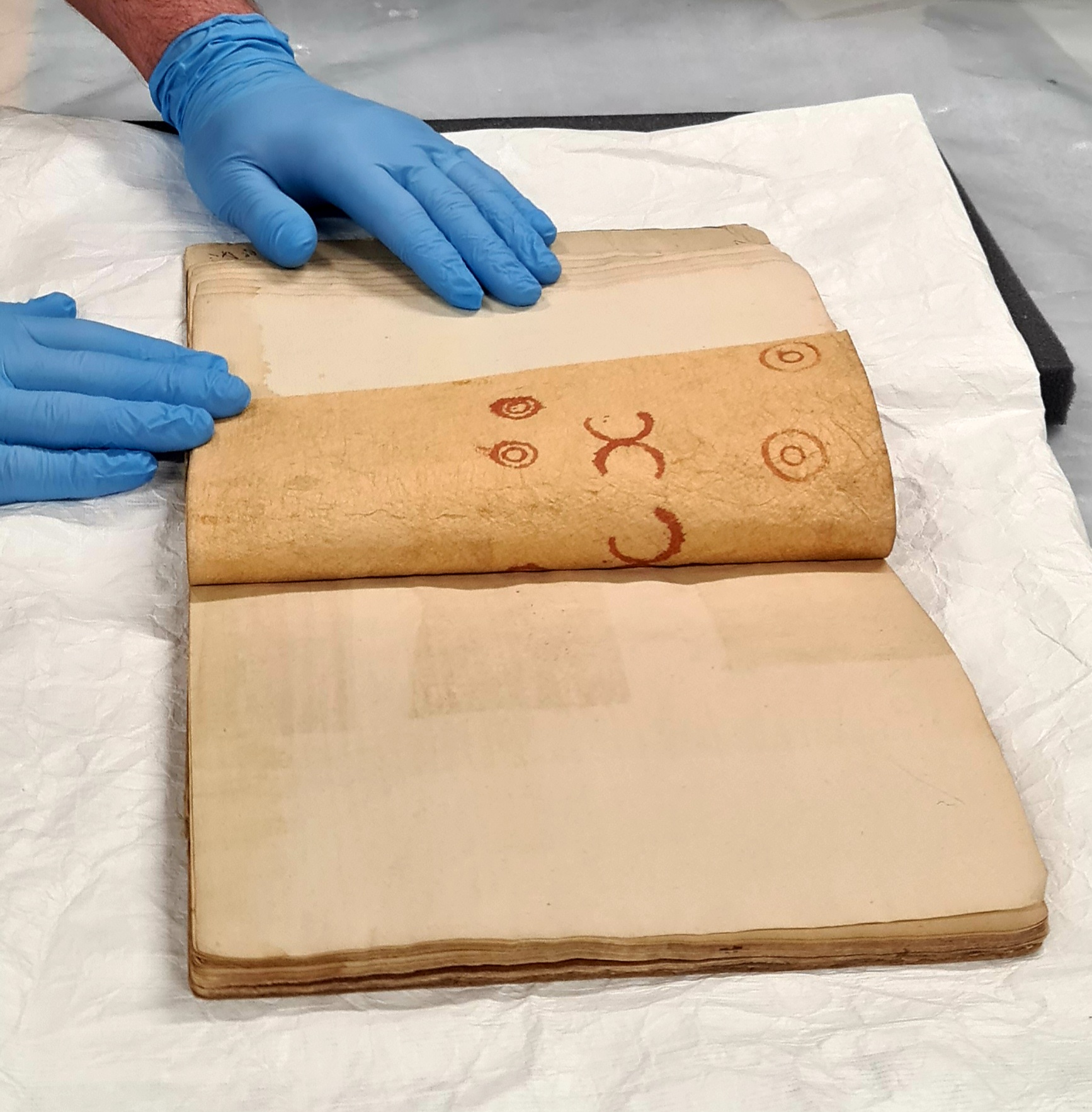 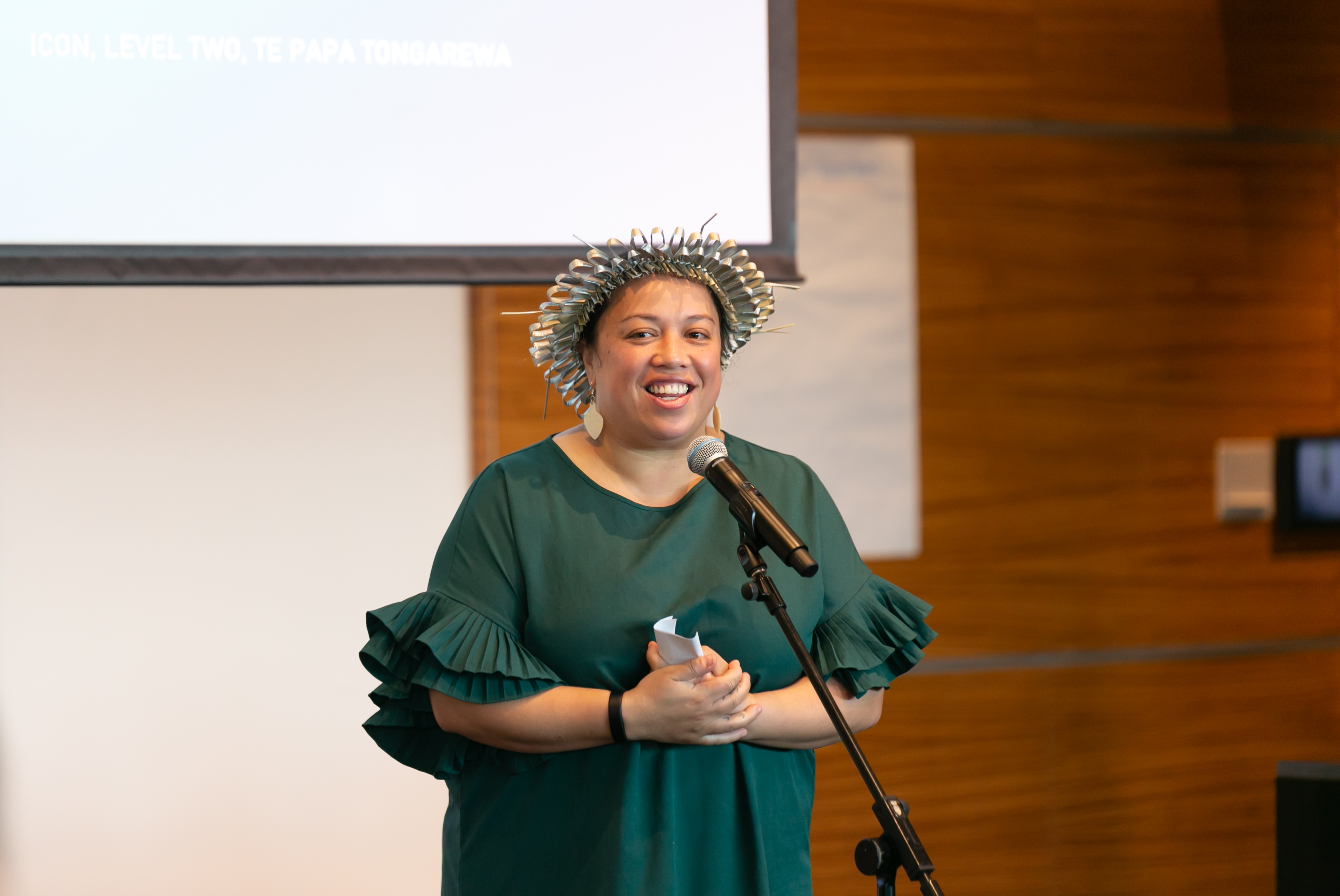 The Alexander Shaw Tapa Sampler is an intriguing book published by Alexander Shaw in 1787, comprising printed text and samples of tapa or bark cloth. The publication is extremely rare, and no two copies of this book are alike. The copy acquired by Te Papa contains 38 samples of tapa cloth, housed in a bespoke, leather-covered clamshell box.

In a statement that emphasises the uniqueness of the various tapa cloth, Shaw wrote that ‘these are only select specimens for a few friends’.

Tapa, most often made from the bark of paper mulberry was the primary textile manufactured by Pacific peoples. It was principally used for clothing, although its uses ranged from the functional to the ritual. During Cook’s voyages to the Pacific, culturally significant taonga like tapa were gifted, traded, tricked, and stolen from Indigenous communities across the Pacific. When Cook and his crew returned home, many of these taonga were dispersed, and came to serve new purposes. It was at this time that Shaw acquired large pieces of tapa representing practices from various islands including Hawaii, Tahiti and Tonga. He then cut the large tapa into small samples, which were mounted by hand into a number of books.

The Alexander Shaw Tapa Sampler is valuable in that it contains “dateable” cloth from the Pacific. It, along with other ethnographic collections resulting from Cook’s voyages, have been described as significant for being ‘the first contact from which we have collections that can be identified and studied’. Importantly, taonga associated with encounters/collisions and Cook’s voyages are also an important reference for Pacific communities. They are a historical source of information for artists, activists and researchers; they represent the immense loss and impacts of colonisation across the region; but they can take on new meanings, becoming a critical juncture of new connections and knowledge in contemporary society.

Through this acquisition Te Papa will move the sampler from the parlour to the museum, from a private collection to a public institution. By doing so, Te Papa is shifting the power dynamic whereby Indigenous narratives are side-lined to one that empowers and educates, and has the potential to subvert colonial attitudes and contemporary stereotypes.

Te Papa are committed to engaging with a wide variety of people from multiple perspectives, and, inspired by the guiding principle of mana taonga, will ensure that the sampler is made accessible and meaningful to Pacific communities.

This article was written with the support of Rachel Yates, Curator of the Pacific Histories and Cultures team. Rachel led an interdisciplinary curatorial proposal that included input from Aotearoa New Zealand Histories, Historical Art and Rare Books, to the Foundation to acquire this historic tapa sampler with samples of cloth from Tahiti, Tonga and Hawaii.

Alongside this acquisition, the team are proposing to undertake an extensive public programming element that will include a tapa cloth wānanga in 2023. The wānanga will be an opportunity to link with various institutions in Aotearoa New Zealand (there are four samplers in institutions across Aotearoa New Zealand), contemporary practitioners’ and makers of tapa cloth, Indigenous researchers, and key contacts from Hawaii, Tahiti, and Tonga.  This will serve their goal in promoting dialogue that centres Indigenous voices, and assess how technology can help us digitally link the samplers held in institutions across the globe.

The Alexander Shaw Tapa Sampler is carefully handled by Rare Book’s Martin Lewis at the welcoming karakia of the Tapa Sampler to Te Papa, October 2021.

Rachel Yates at the handover of Otintaai, a woven climate change warrior made by i-Kiribati artists Louisa Humphry and Kaetaeta Watson, May 2021.